John Drury’s “This is Tazewell County, Illinois” (1954), page 210, offers this brief description of Lilly: “Near the eastern border of the county lies Lilly, still another community in Mackinaw Township. It has a population of 90. Lily (sic) is on the New York Central System and is served by the post office at nearby Mackinaw.” 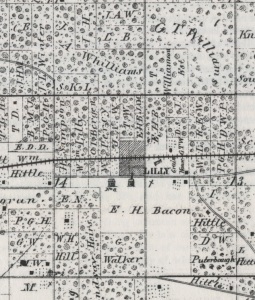 The land of William Lilly, from whom the village of Lilly got its name, is shown just west of town in this detail of an 1873 Tazewell County plat map of Mackinaw Township.

Today the railroad is no more, and Lilly’s population is even lower than it was in 1954. Lilly chiefly owes its existence to the railroad, having started out as a stop along the old Indianapolis, Bloomington & Western Railway, whose tracks connecting Pekin with Indianapolis were laid down in 1869.

That the construction of the railroad is what brought Lilly into being is reflected on old plat maps of the county. There’s no trace of Lilly on an 1864 wall plat map of Tazewell County, the spot then being designated as undifferentiated “Lots.” But Lilly was there by the time the 1873 “Atlas Map of Tazewell County” was published. The railroad was built between those dates. 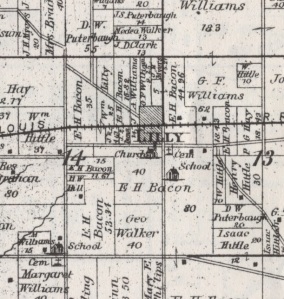 The hamlet apparently was named after William Lilly (1822-1894), a Maryland-born settler of Welsh descent whose farm is shown about a half-mile west of Lilly on the 1873 plat of Mackinaw Township. No one with the name of Lilly owned any farms in Mackinaw Township in 1864, but that year “W. Lilly” (i.e., Lilly’s namesake) and a “J. Lilly” are shown owning adjoining farms about six miles south of Lilly in Little Mackinaw Township. A short biographical sketch of William Lilly may be found on page 518 of Charles C. Chapman’s 1879 “History of Tazewell County, Illinois.” A longer sketch is on page 1039 of the “Historical Encyclopedia of Illinois and History of Tazewell County.” William Lilly is buried with his wife Elizabeth and sons Joseph and William in Lilly Cemetery, located at the southeast corner of the intersection of Fast Ave. and Lilly Road (in the southeastern extremity of Lilly).

This 1891 plat shows the small hamlet of Lilly, named for Tazewell County pioneer William Lilly (1822-1894) and established circa 1870 as a train depot near William Lilly’s farm. The spot first attracted travelers — such as Abraham Lincoln — in the 1830s, who would overnight at an inn there on the Old Peoria Road.

Pioneer farmers lived in and near the future site of Lilly well before the arrival of the railroad. Until a tragic fire in May 2014, Lilly’s most famous landmark was the old Lilly Inn, first erected in the 1830s to serve travelers on the Old Peoria Road that linked Peoria, Mackinaw, Danvers, and Bloomington. Lawyers and judges in the Eighth Judicial Circuit – including Abraham Lincoln – would sometimes stop overnight at that inn, some two or three decades before Lilly was founded and named.

An enlarged plat of Lilly in an 1891 atlas of the county shows the hamlet with only two east-west streets (William and Broadway – today, roughly, Killion and Winkler) and two north-south streets (Lindsey and Hay – today, roughly, Killion and Lilly). The plat also shows the Cleveland, Cincinnati, Chicago & St. Louis Railroad (formerly the I. B. & W) slicing east-west through the heart of Lilly, with the depot on the north side of the track and a mill and grain elevator on the south side. A 1910 plat of Lilly looks much the same as the 1891 plat, the only differences being the addition of a second railroad track – that of the Illinois Traction System – and the Zorn Grain Co. on the sound end of the hamlet. By 1929, however, the Zorn Grain Co.’s property had become the location of the Lilly Christian Church.

This 1929 plat of Lilly shows further changes in the village.

Lilly had always benefited from the traffic and commerce that moved between Mackinaw and Bloomington, and the coming of the railroad was an even greater boon. With the advent of the automobile in the early 20th century, however, as well as the shift of traffic from Old Peoria Road (Fast Ave. and Runyon Road) to Illinois Route 9, traffic and trade bypassed Lilly, which consequently has remained small and out of the way. No churches or businesses are currently located in Lilly, but the Mackinaw Valley Vineyard on Route 9 is just a mile from Lilly to the south. 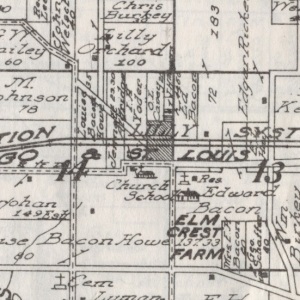