For the past few weeks, the Pekin Public Library has displayed a gallery of photographs taken in Japan in 1945 by World War II veteran A. Dean Riedlinger of Pekin, who served in the Occupation Forces in Japan immediately after the war’s end. His photos of Japan will remain on display opposite the staircase in the lobby through next week.

In keeping with the observance of Veterans Day, the library’s Local History Room is also displaying a group of articles, photos, cards, scrapbooks and other mementos about U.S. Army Staff Sgt. Stanley A. Newell, 69, a Vietnam War veteran from Pekin who was held as a prisoner of war by the Vietcong from 1969 to 1973. The articles and photos come from a collection provided by Newell’s sister Amy Worner of Pekin, and will be displayed for the next four weeks.

Like many young men of his generation, Newell was drafted during America’s war on behalf of South Vietnam against the Communist forces of North Vietnam, which raged from the summer of 1964 through early 1973. About 2.6 million U.S. soldiers served within the borders of South Vietnam, with about half of them seeing combat or being exposed to enemy attack. About 282,000 American and allied soldiers aiding South Vietnam were killed during the war.

Drafted in 1966, Newell left Pekin on Sept. 14 of that year. As an Army private first class sent to fight in Vietnam in Jan. 1967, Newell was captured by the Vietcong on July 12, 1967 while on a search and destroy patrol in the Ia Drang Valley in South Vietnam’s Pleiku Province along the Cambodian border. On that date, the Army classified him as missing in action (MIA). He was held as a POW until the war’s end, suffering indignities at the hands of his captors, and making a failed escape attempt on Nov. 6, 1967, along with four other POWs. Following the withdrawal of American forces (which would lead to North Vietnam’s conquest of South Vietnam in 1975), the Paris Peace Accords in 1973 provided for the return of American POWs held in Vietnam. Newell was among those POWs who were released in March 1973.

Sgt. Newell was one of four Peoria-area POWs released at that time. The others were Air Force Capt. Gary Sigler of Table Grove, Air Force Lt. Col. Bruce G. Seeber, formerly of Metamora, and Navy Capt. James B. Stockdale, formerly of Abingdon (who had been the highest ranking Navy man held by the Vietcong).

Unlike the families of Sigler, Seeber, and Stockdale, the Newell family of Pekin received almost no news of their son during his years of captivity. After his capture, the only evidence that he had not been killed in combat was a grainy Xerox copy of a photo from a Hanoi newspaper showing Newell and three other POWs being guarded by two North Vietnamese soldiers. That photo enabled the Army to change Newell’s status from MIA to POW on May 17, 1969.

After Stan Newell was captured by the Vietcong in July 1967, the only evidence that he had not been killed in combat was a grainy Xerox copy of this photo from a Hanoi newspaper showing Newell and three other POWs being guarded by two North Vietnamese soldiers. That photo enabled the Army to change Newell’s status from MIA to POW on May 17, 1969.

But the Newells had no way of knowing whether he’d later succumbed during his imprisonment – their letters to him were never answered. During those years, Newell’s mother, Mrs. Arthur Newell, wrote letters to government officials and agencies, gave media interviews, and spoke publicly to keep her son’s plight fresh in people’s minds. Thousands of Pekinites wore Stan Newell POW metal wristbands as signs of their hope.

“We are happier than we can ever say,” Newell’s mother had said in joy and relief when she was informed that her son was coming home. “Now we know something. Now we don’t have to wait until the very end to find something out.”

After regaining his freedom on March 5, 1973, Newell was flown to the Philippines, then to Denver, where he was reunited with his parents and sisters after six years of separation. He returned to Pekin on March 24, 1973, landing that day at Pekin Airport, where he was given a hero’s welcome by a band and a large crowd that included Mayor William Waldmeier, then was given a parade down Court Street. 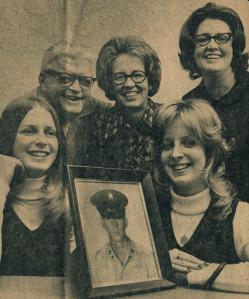 The family of U.S. Army Staff Sgt. Stan Newell are all smiles in this 1973 photograph taken after they had received word that Sgt. Newell was to be released by North Vietnam. 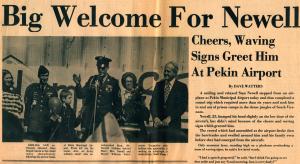 The news of the homecoming of Vietnam War POW Army Staff Sgt. Stan Newell was featured under a banner headline on the front page of the March 24, 1973 edition of the Pekin Daily Times. A two-page spread of photos of Newell’s hero’s welcome at the Pekin Airport and parade down Court Street also was published in that day’s paper.