On the last page of the very first Pekin City Directory, published by Omi E. Root of Peoria in 1861, is an entry for an “independent company of volunteer militia” called the “Pekin Zouaves.” This is how Root’s Directory describes this militia company:

The reason this militia company was formed was one of the most important events in U.S. history – the Confederate States of America’s attack on Fort Sumter on April 12, 1861, which sparked the U.S. Civil War. Soon after, militia companies were established throughout the remaining United States to prepare to aid in the Union’s war efforts against the Confederacy, and the Pekin Zouaves were one of those companies.

But why was this company called “Zouaves”? The original Zouaves were a French army light infantry corps organized in 1830 – at first the French Zouaves were all Algerians from North Africa, and consequently their uniforms were Middle Eastern or Turkish in style. Romantically imitating the French Zouaves, other nations also established their own companies of soldiers wearing Zouave-style uniforms, including militia companies in Illinois and Missouri during the early months of the Civil War.

At the website www.infantry8thmo.org/HTMhistory.html is a “Brief History: 8th Missouri Volunteer Infantry (US) – The ‘Fighting American Zouaves.’” Following are excerpts from the “Brief History” (emphasis added):

“As a result of a direct order from President Lincoln to alleviate the prejudice against the Irish, the 8th Missouri Infantry was organized in St. Louis from June 12 to August 14, 1861. Over 600 Irish boatmen & deck hands left the St. Louis riverfront to fight under the command of Captain Morgan L. Smith. Originally from New York, he and his brother, Captain Giles A. Smith, also recruited troops from Bloomington, Illinois. The 8th MO uniform was that of the American Zouaves.

“The Peoria Zouave Cadets were organized in Peoria, Illinois 3/23/1861. They recruited up to war strength and left for St. Louis on 6/19/1861 but, upon their arrival, there was a disagreement and about half returned to Illinois to join the 17th Illinois. An under-strength company calling themselves the Pekin Zouaves from Pekin, Illinois, sent about 30 recruits from Peoria to St. Louis, and filled up the company. They mustered in as Company H. Neither company provided the ‘Zouave influence’ for the company since they were already being referred to as the ‘American Zouave Regiment.’ Company L sharpshooters were recruited in Cape Girardeau, Missouri.

“The 8th MO served the duration of the Civil War and fought decisive battles under Generals Grant and Sherman. They became well known for their tenacity, displaying Zouave fighting techniques on the battlefield. Generals Grant and Sherman write about the 8th Missouri in their Memoirs. General Grant’s son, Frederick Dent Grant, writes in ‘At the Front With Dad’ about slipping into the Battle of Vicksburg at age 13 with the 8th Missouri. Eleven soldiers in 8th MO were awarded the Congressional Medal of Honor for their actions during the Siege of Vicksburg.”

As this column has noted previously, one of the members of the Pekin Zouaves was none other than Pekin’s pioneer historian William H. Bates (1840-1930). Of the five original officers of the Pekin Zouaves, Capt. G. W. Baker is listed on page 13 of the 1861 Pekin City Directory as “BAKER, GEORGE W. F., ambrotype and photographic gallery, cor. Court and Second ; bds. Tazewell House.” Thus, Baker was, like Henry Hobart Cole, one of Pekin’s early photographers. 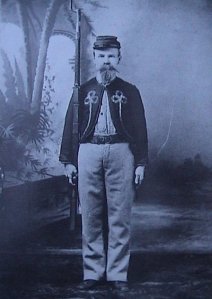 First Lieut. H. P. Finigan was Henry P. Finigan, a Catholic Ulster-born Pekin attorney, land and real estate agent, and grain merchant. Finigan with his wife Margaret and Margaret’s parents together escaped the Irish Potato Famine and settled in Pekin. Henry’s date of birth is uncertain, because when he registered for the draft in June 1863, his age was written down as 31, but the 1870 U.S. Census says he was 34 at that time (that census also mistakenly gives his middle initial as “B.” rather than “P.”).

Second Lieut. L. B. Greenleaf was Luther Berge Greenleaf, born in Connecticut in 1834 or 1836, died August 1902 in Onarga, Ill. The 1861 Pekin City Directory says he was then a law student. His Onarga newspaper obituary says although he studied law, he instead became a journalist in Peoria, later moving to Kansas for a while, then finally settling down in Onarga.

Third Lieut. W. M. Olmsted was William M. Olmsted (1802-1872), who in 1861 was a clerk at Stephen Roney’s Hardware, 33 Court St., at the corner of Court and Second. Olmsted later was promoted to the rank of captain during the civil war. His grave in Lakeside Cemetery is one of the old Oak Grove Cemetery burials.

Lastly, Orderly Sgt. C. R. Cummings was none other than Columbus R. Cummings (1834-1897), a prominent Pekin businessman and land owner who subsequently served as Pekin’s 20th mayor (1875-1876), later moving to Chicago, where he became a Gilded Age railroad tycoon and banker. It was the heirs of C. R. Cummings’ great estate who in 1916 gave the Pekin public schools an athletic field with the stipulation that it should be named after the estate manager James M. James (1849-1918).