In the From the Local History Room column published in the April 23, 2016 Pekin Daily Times, we discussed the “Five Points” intersection in downtown Pekin and sought an answer to the question of when the intersection first got its name.

At that time, we were able to determine that the “Five Points” name for the intersection of Court and Broadway must have been well established by 1955, because the 1955 Pekin City directory lists the nearby “Five Point Tavern” (sic) at 623 Court St.

Another interesting scrap of information has since turned up that enables us to state that the terminus a quo for the origin of this designation must be well before 1930. This we know from the headline of an article on the front page of the Sept. 8, 1930 Daily Times, which says, “2 A.M. Crash Wakens 5 Pts. — Embarrassing Time for Girl.”

As will become evident, the article itself, shown below, really needs no further comment. 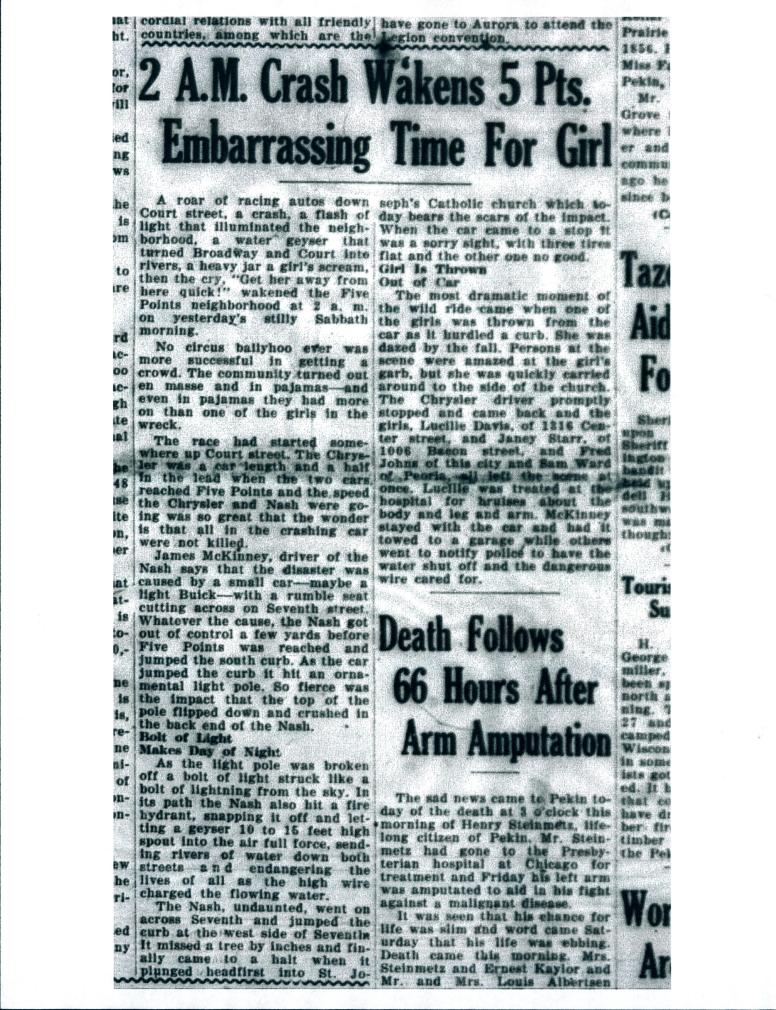 One of the publications in the Pekin Public Library’s Local History Room collection is a short book – almost a booklet – of eight chapters covering 48 pages. Written by Dewitt County Presbyterian pastor named Singleton B. Bedinger and published in 1973, the book is entitled, “Little Egypt: A Brief Historical Sketch of Southern Illinois.”

The relevance of Southern Illinois history to Pekin’s local history is probably not immediately apparent, but Bedinger succinctly states the relevance on page 9, where he says, “Egypt was the first part of Illinois to be settled.” Taking an overview of the history of white European settlement of Illinois in the years following the Revolutionary War, we find that Illinois was settled from the south up, and thus the first capital of the state of Illinois was Kaskaskia in Southern Illlinois. Consequently, many of the first settlers of Tazewell County in the 1820s had come from Southern Illinois, the region of the state that has long been known as “Egypt.”

As this column first discussed three years ago, among the early Tazewell County settlers with Southern Illinois connections were the brothers Elisha Perkins and Major Isaac Perkins, one of the co-founders of Pekin and Tazewell County’s first Recorder of Deeds. (See “The life and death of Major Isaac Perkins,” in the Aug. 3, 2013 Pekin Daily Times, page B2) As we recalled then, Isaac’s father Solomon was the first permanent settler in the Cave-in-Rock area of southern Illinois in the early 1800s. One of Solomon’s neighbors in Cave-in-Rock was Capt. Lewis Barker, first Illinois state senator for Pope County, Ill. Solomon’s son Isaac married Capt. Barker’s daughter Jane Barker in Pope County, Ill., in 1813. Jane’s sister Susannah married Isaac’s brother Elisha. Jane and Susannah streets in Pekin are named after them.

One of the first matters Bedinger addresses in his book is why Southern Illinois is known as “Egypt.” According to Bedinger, one popular explanation is that the name arose from the hardship and near famine that threatened the pioneer settlers of Illinois following “the Great Snow” of 1830-31. Lacking food due to crop failures, Illinois pioneers had to buy grain in Southern Illinois, which had escaped the effects of the cold and snow. The story goes that these hungry settlers compared their plight to the biblical story of the sons of Jacob having to go down to Egypt to buy grain during a seven-year famine, and so Southern Illinois became their “Egypt.”

But Bedinger says this popular account is unhistorical. In fact, the name comes from the 1818 founding of the city of Cairo, named after the modern capital of Egypt. Looking upon the confluence of the Mississippi and Ohio rivers, Cairo’s founders apparently were reminded of the Nile Delta. Pioneers soon began to give other towns in the area names like Karnak, Thebes, and Goshen. All of this was well before the Great Snow of 1830-31.

Bedinger also argues that Little Egypt was connected to the invention of an old nickname for Illinois – “The Sucker State.” Bedinger writes (pages 10-11):

“One would expect the inhabitants of Little Egypt to be called Egyptians, but generally such was not the case. Instead they were called suckers and there are several theories about this. The most likely explanation is that the term originated in the northwest part of Illinois. Men would go there to work in the lead mines during the summer months. Because Galena was situated in Indian territory and was headquarters for the mining industry, the miners from the south usually would travel upstream on the Mississippi River instead of overland. The fish known as the sucker would reach the vicinity about the same time as the miners. It was not unusual to hear someone say, ‘Here come the men from Southern Illinois; it’s time to fish for suckers.’ If the fish arrived first, someone would say, ‘Here come the suckers; now look for the Southern Illinoisans.’” 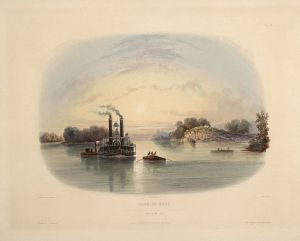 This aquatint illustration by Karl Bodmer, from the book “Maximilian, Prince of Wied’s Travels in the Interior of North America, during the years 1832–1834,” shows Cave-in-Rock on the Ohio River. The brothers Isaac and Elisha Perkins and their wives, Jane and Susannah Barker, lived in the Cave-in-Rock area of Southern Illinois before settling in Tazewell County and taking part in the founding of Pekin in 1829-30.

A few weeks ago, a Pekin Public Library patron asked two “pointed” questions: Why is the V-intersection of Court Street and Broadway, located on the north side of Broadway from St. Joseph Catholic Church, called “Five Points”? And when did it get its name?

To learn the answers to those questions, we turned to Lou Klockenga of the Tazewell County Genealogical & Historical Society. The answers have to do the layout of that intersection in the past, Klockenga said.

There was only one difficulty with that moniker, Klockenga said. “It was actually six points when you counted the streets.” 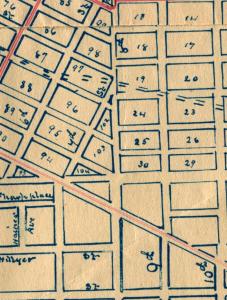 So, why “five” points? We can only guess that the intersection made people think of a star, which is typically represented as having five points. Perhaps by “Five Points,” they really meant, “That crazy star intersection where Court and Broadway and Seventh all come together.”

In any case, the name has stuck, and Pekin residents still call it “Five Points” even though, as Klockenga commented, “That intersection has been reworked.” To eliminate the tangled mess of traffic at Five Points, during the 1980s the city closed off Seventh Street at Broadway on the south and sealed off Seventh on the north as well, so Seventh no longer intersects with Broadway at all. Instead, south of Broadway, Seventh ends in a cul-de-sac at the St. Joseph Church entrance, and to the north Seventh intersects with Margaret Street but extends no further. In closing off Seventh on the south side of Broadway, Court Street was interrupted, dog-legging a short way eastbound along Broadway to a traffic-light-regulated intersection at Margaret, while westbound traffic on Court is routed up to Broadway via Eighth Street on the east side of St. John’s Lutheran Church.

It’s unknown when this intersection first got its name, but it was certainly prior to 1955. We know that’s the case because the 1955 Pekin City directory lists the nearby “Five Point Tavern” (sic) at 623 Court St., owned and operated by Louis M. Friedrich. The tavern does not appear in the 1952 directories or earlier (the Local History Room collection does not include city directories for 1953 and 1954).

After 1984, though, the tavern’s name was changed to Mickey’s Irish Pub, which was operated by Sharon Bushong until about 1989. The former Five Points tavern building has since been demolished and is now a parking lot. But the intersection for which the tavern was named is still known as Five Points. 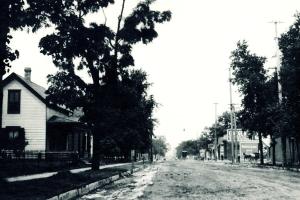 This 1912 photograph, reproduced in Herget National Bank of Pekin’s 1998 Historical Calendar, shows a view of Court Street in Pekin looking west from the Five Points intersection.