This is a revised and expanded version of a “From the Local History Room” column that first appeared in June 2011 before the launch of this weblog. 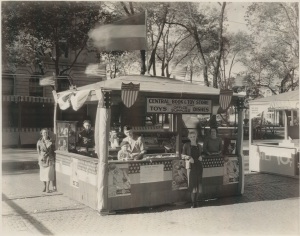 Once upon a time, or beginning in 1898 and apparently ending in the mid-1930’s, Pekin would put on vibrant, very popular street fairs, hosted in the city’s downtown.

In 1902, on the day of the parade, 18,000 people attended this event. Two railroad companies from Peoria brought 2,800 people into our fair town. This was quite the event, with officers and committees and a whole list of rules and regulations.

This is from the official brochure and program for the 1902 fair:

“The many favorable comments upon the originality and beauty of the FREE STREET FAIRS given by Pekin during the years 1898 and 1899, and the clean and praiseworthy manner in which they were conducted, has resulted in a unanimous desire on the part of our wide-awake business men and citizens to out-do all previous Street Fairs, therefore the Association has selected October 15, 16, 17 & 18, 1902, as the dates on which Pekin will again offer free entertainment to the assemble multitudes. THE MOST FASTIDIOUS TASTES of the visitor and his family will find only pleasure and instruction in the beautiful array of VARIEGATED BOOTHS and MUSICAL and DESCRIPTIVE ENTERTAINMENTS WHICH WILL BE GIVEN DAY AND NIGHT! THE FACT THAT PEKIN, in her former exhibits, MORE THAN FILLED HER PROMISES to the public, should, and we believe will, be encouraged in giving her third street fair, by an almost universal visit from the citizens of Central Illinois.”

The brochure went on to describe the “great parade” and emphasized “new features every day.” The fair of 1898 had contained 80 booths, running down the middle of the street and on either side, corresponding to the front footage of the stores erecting them. Downtown Pekin was the place to be in those days! 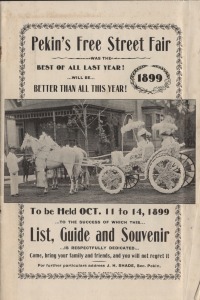 Shown here is the front cover of the 1899 Pekin Street Fair official program and souvenir. The Pekin Public Library’s copy of the program was preserved in the 1902 library cornerstone time capsule. 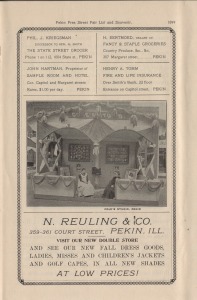 This page from the 1899 Pekin Street Fair official program and souvenir features a photograph of the Cole’s Studio booth. Cole’s Studio was the photography business of Pekin’s pioneer photographer Henry Hobart Cole.

The old tradition of Pekin’s street fairs continues in new forms even today, with the popular annual Marigold Festival and downtown events organized and promoted by Pekin Main Street. Pekin also put on an old-fashioned street fair on and near the premises of the Tazewell County Courthouse on Aug. 7, 1999, as part of the major celebrations of the 175th anniversary of Pekin’s settlement and the 150th anniversary of Pekin’s incorporation as a city.

Festivities at the 1999 street fair were literally dampened by a summer thunderstorm, but the celebrations went on as planned. “As black clouds poured rain and thunder bellowed, Mayor Dave Tebben and pioneering Tharp family descendant Norman Tharp led about 100 people as they sang ‘Happy Birthday’ to Pekin,” the Pekin Daily Times reported. 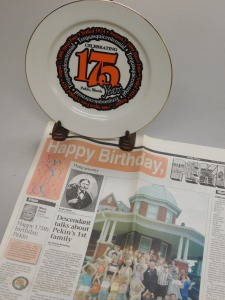 Shown are a commemorative plate and a special section of the Pekin Daily Times marking the celebration of Pekin’s 175th birthday. Both items are in the Pekin Public Library’s Local History Room collection.

Hopefully the city’s bicentennial celebrations five years from now also won’t be rained out, even if rained on.

Included in the Pekin Public Library’s Local History Room archives are copies of the 1899 and 1902 Pekin Street Fair brochure and a 1999 Pekin Terquasquicentennial commemorative plat embossed with the official logo of the 1999 Pekin 175th Anniversary.

Here’s a chance to read one of our old Local History Room columns, first published in December 2011 before the launch of this blog . . .

Teepees along the railroad tracks?

This week we’ll revisit a few recent “From the Local History Room” columns as we see what we can learn from a copy of a vintage Pekin photograph on file in the library’s Local History Room. The photo is remarkable because it shows a long row of teepees or wigwams between some railroad tracks.

The copy of this photo, a halftone image, was clipped from a newspaper or magazine, and is accompanied by a caption that informs us that the photographer was none other than Pekin’s own Henry Hobart Cole, whose life we have reviewed in this column previously. 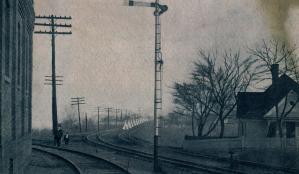 In this vintage photograph taken by Henry H. Cole (1833-1925), a row of wigwams stretches northward between the railroad tracks in an area of northwest Pekin just to the west of Second Street.

The caption does not say when Cole took the photograph, but several clues both in the photo and the caption help us to narrow down the period when it was taken. These clues also show where the photo was taken, and suggest who placed the wigwams in that unlikely location – or rather, who didn’t place them there.

The caption says, “The long row of wigwams, as you look northward along the tracks of the Peoria & Pekin Union Railway, east of Pekin Lake, represents the site of the largest village of Pottowattamie Indians in this region at the advent of the white settler . . .”

By consulting some of the library’s old maps of Pekin and tracing the rail lines, we can see that the foreground of the photo shows the area where Second Street and Market Street used to intersect – today that stretch of Market Street is a bicycle path. The row of wigwams appears to start around the area of Catherine and State streets.

Obviously the wigwams were not actual Native American dwellings — no one can live in the dangerous plot of ground between two lines of rail. Also, as mentioned in previous columns, Pekin’s Indian population was deported to Kansas in the mid- to late 1830s, while the railroad did not come to Pekin until 1859. These wigwams, rather, indicated the area of Pekin where an Indian village formerly was located. Perhaps they were a display for a community fair or celebration.

The caption provides two more clues as to when Cole took the photo. It says the village was “fully one-half mile in length” and “on the high ground leading along Main street from the present gas works southward.” Similarly, W.H. Bates’ 1902 essay, “Historic Pekin!,” says the village was “on the high ground just east of the Gas Company’s coal sheds, on what is today First Street.”

Gas lights were installed on Pekin’s streets in 1866, so the gas works were constructed by that year, which means the photo can be no older than 1866. Similarly, the caption’s reference to “the Peoria & Pekin Union Railway” suggests a date no earlier than 1880, the year that railroad company was incorporated.

An 1877 aerial “View of Pekin Ill.” in the Local History Room collection depicts the area shown in this photo, including the frame house on the right and the large brick structure on the left. Both the 1877 aerial view and the photo show an overall absence of houses and industrial or business structures in that part of Pekin. Cole went into semi-retirement in 1911, but we would expect to see more buildings in the photo if it was taken that late in his career.