This is a reprint of a “From the Local History Room” column that first appeared in April 2013 before the launch of this weblog.

About 15 years ago, the Historic Preservation Commission of Pekin turned its attention to the possibility of preserving an old building apparently built in or around 1879, formerly located at 126 Sabella St.

As they researched the history of the families and businesses that lived in or operated from that location, the commission members gathered a wide array of historical materials going back to some of the earliest owners of the property. Regrettably, after this research was conducted, the structure was later demolished and this old lot is empty today. 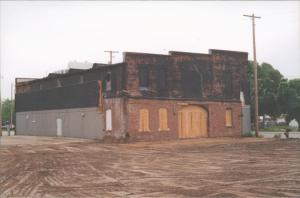 Above is shown the rear of the former Vogels grocery store that was located at the corner of Second and Sabella streets. The structure, demolished about a decade ago, was apparently built around 1880 by George W. Rankin, who operated a mill work business out of it.

Lot 11, Block 3, of the Original Town of Pekin, the southwest corner of Second and Sabella streets, was originally owned by the town founders, such as Nathan Cromwell and William Haines. The lot is only three blocks north of the site of Jonathan Tharp’s log cabin of 1824, the first structure built by a European-American settler in what would become Pekin. From 1831 to 1847, the property changed hands 15 times. One of those times was on April 24, 1843, when lots 1 through 12 of Block 3 were purchased by Charlotte Bacon for $1,200.

Four years later, John and Eliza Ayers purchased Lot 11 and another lot in a different block for a total price of $150. John, who was only 42 years old, died later that year on Nov. 26, 1847. In 1855, the John Ayers estate was involved in legal action in which Abraham Lincoln appeared as an attorney. This was the case of Ayers vs. Brown & Brown, in which Ayers’ estate, represented by Lincoln, sued John and Thomas Brown to recover a number of horses and cattle. In May 1855, the parties reached an out-of-court settlement in which the Ayers estate got one horse and the Browns were allowed to keep the other animals.

John’s widow, Eliza Ayers, continued to live at 126 Sabella St., and the very first Pekin City Directory in 1861 shows her living there. Among her neighbors that year were lumber merchant Alex Bateson on the southeast corner of Second Street and Sabella, and Edwin Browne, who operated a dry goods store on the northeast corner of that intersection.

Eliza Ayers died on Sept. 21, 1877, and in her will directed that her house and Lot 11 be sold and the proceeds given to her brother William McDowell, who was then living in Missouri. Two years later, on Oct. 6, 1879, George W. Rankin purchased Lot 11, where he apparently built a brick building which he used to conduct a mill work business that, according to the 1887 Pekin City Directory, made sashes, doors, blinds and lumber.

Henry A. Reuling bought Rankin’s business and Lot 11 on Oct. 7, 1891. Reuling merged his business with K. S. Conklin’s lumber business and acted as the manager of the new firm, the Conklin-Hippen Reuling Co. They were the contractors who built the Mineral Springs Park Pavilion and Palm House, the old Tazewell Club building, and also did work on the old Pekin City Hall.

In 1902, Lot 11 was sold to the Pekin Gas & Heating Manufacturing Co., which operated a machine shop out of the first floor and used the second floor for storage. By 1901, the property had been sold to Henry Weber, who operated the Pekin Engine & Machine Co. on the first floor while he and his wife Emma lived on the second floor. The Weber estate sold Lot 11 to Roscoe Weaver in 1948, and Weaver also operated a machine shop out of the same building.

Then in 1963, Ruth Weaver sold Lot 11 to Vogels Inc., which ran a well-known grocery store for many years at that location. Today both Vogels and its old brick building that probably was built in 1879 by George W. Rankin are only a memory of Pekin’s past.