The state of Illinois’ Bicentennial Year draws to a close this Monday, Dec. 3 – the 200th anniversary of Illinois statehood – when concluding ceremonies will be held in the state’s capital of Springfield and in communities throughout the state. Pekin’s ceremony, during which Pekin’s Illinois Bicentennial flags will be lowered, will take place at 11:45 a.m. Monday on the Tazewell County Courthouse lawn.

The official logo of the Illinois Bicentennial was officially unveiled at the Old State Capitol in Springfield on Jan. 12, 2017. 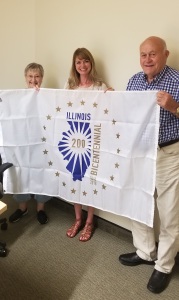 The Pekin Public Library’s celebration of the Illinois Bicentennial will conclude Friday, Dec. 7, when the 12th and final video in the library’s Bicentennial Series will be shown at 11 a.m. in the Community Room. Since that day is also Pearl Harbor Day, the 30-minute video will be an oral history project called “World War II POW Stories,” in which former World War II prisoners of war tell of their experiences of war and being held captive by the enemy.

Immediately following the video, at 11:30 am. in the Community Room popular local historian and writer Tara McClellan McAndrew will present “Becoming a State: the Illinois Way,” an informative and at times humorous program on Illinois’ road to statehood and the way Illinois’ legislators in Kaskaskia, the first state capital, crafted Illinois’ first state constitution and set up our first state government. Her program will last about an hour.

For the concluding “From the Local History Room” column in our Bicentennial Series, we will take a look back 100 years and recall the celebration of the centennial of Illinois statehood in 1918.

In December of 1918, Europe and the U.S. were holding Armistice talks in the aftermath of the end of World War I, and the Spanish Flu Pandemic was raging around the world and claiming the lives of anywhere from 20 million to 50 million people worldwide, including about 675,000 Americans. These facts cast a pall over Illinois’ Centennial celebrations – but the centennial was celebrated nonetheless.

The Illinois governor in 1918 – who presided over Springfield’s ceremonies marking the state bicentennial – was Frank Orren Lowden (1861-1943), a Republican. Lowden, a Chicago attorney, was the state’s 25th governor, serving from 1917 to 1921, and is remembered for taking action to end the Chicago race riot and restore order to the city in July-August 1919. The state population that year was about 6,275,000, about 260,000 of which lived in Chicago, then the nation’s second largest city, while Peoria’s population was about 70,000. (Today the state’s population is about 12.77 million, and about 21 percent of Illinoisans live in Chicago.)

Pekin’s own Illinois Centennial celebrations consisted of a public assembly at 8 p.m. on Tuesday, Dec. 3, 1918, in the old theater of Pekin Community High School (the former West Campus). The gathering included music and singing – including a collective singing of the official state song, “Illinois” – as well as addresses given by former Illinois Gov. Charles Samuel Deneen (1863-1940), who had served as the state’s 23rd governor from 1905 to 1913, and former Illinois State Rep. James Frank Gillespie of Bloomington (1869-1954), who served in the Illinois General Assembly from 1913 to 1914. The organizers of Pekin’s celebration evidently sought to make the event bipartisan – Deneen, who is best known for putting down the infamous Springfield race riot of 1908, was a Republican, while Gillespie was a Democrat and later became a U.S. Congressman. 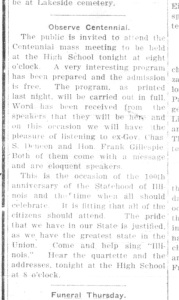 The only mention of the Illinois Centennial in the Dec. 3, 1918 Pekin Daily Times was an inside-page brief. The centennial celebration was bumped from the front page by major news from Europe and Washington, D.C., regarding the Armistice talks at the end of World War I.

This photograph from the 1919 Pekinian yearbook shows Pekin Community High School as it was at the time of the Illinois Centennial in 1918. Pekin celebrated the state centennial with a community program at the high school theater on Dec. 3, 1918. The high school board members at the time were H. J. Rust, William Fair, A. Van Horne, F. C. Gale, and D. F. Velde.

Our knowledge of Pekin’s celebration of the Illinois Centennial is, sadly, very limited, because several issues of the Pekin Daily Times from that week are missing. The issue of Dec. 3, 1918, is available in the library’s microfilms in the Local History Room – but, remarkably, the issues of Dec. 2, 4, and 5 have not been preserved on microfilm.

Consequently, the only information on Pekin’s celebration on Dec. 3, 1918, that we can glean from the Pekin Daily Times comes from a single 26-line announcement, entitled, “Observe Centennial,” on an inside page of the Dec. 3 issue. That announcement makes reference to a published program of events that had appeared in the Dec. 2 issue, and no doubt a story about the Centennial program appeared in the Dec. 4 – but we cannot tell what was said about the Illinois Centennial in those issues.

Furthermore, the announcement in the Dec. 3, 1918 issue of the Daily Times is the only item in that issue regarding the Illinois Centennial. Bigger news overshadowed the centennial in the Daily Times. The front page of that issue was filled with news of the Armistice talks in Europe, including a report on how the office of the U.S. Presidency would continue to function during the months that President Woodrow Wilson was in France for the talks.

That issue of the newspaper also had a story on warnings from the U.S. Surgeon General’s Public Health Service regarding the persistence of the deadly Spanish Influenza – and, sadly, the paper that day ran a few death notices of infants and children who had succumbed to the flu – oh so common an occurrence in newspapers during those months.

A century later, the old Pekin high school building where the state centennial was celebrated is no more, and Chicago with a population of 2,687,682 is now only the nation’s third largest city (after New York and Los Angeles) – but neither is the world today grieving for millions of lives lost and nations ruined in the immediate aftermath of an unprecedented global war, nor harrowed by a worldwide pandemic, nor are Illinois’ major cities today racked and crippled by cruel race riots.

For all the troubles and challenges that the people of Illinois face today, life in Illinois in 2018 is still safer, healthier, and more prosperous than it was in 1918. As Illinois endured its troubles and faced its challenges in 1918, it can do the same in 2018. If Illinois is around for its Tricentennial in 2118, we may hope that generation will look back in gratitude and with wisdom for the state’s achievements and failures of the previous century.