The Local History Room at the Pekin Public Library currently features a display of articles and mementos pertaining to the Pekin connections of U.S. Presidents. As is well known here in Pekin, prior to his election as President, Abraham Lincoln frequently visited Pekin and Tremont while working as an attorney in central Illinois from the 1830s to the 1850s. Much later, President Herbert Hoover made a quick whistle stop in Pekin during his re-election campaign on Nov. 4, 1932. President Dwight D. Eisenhower also made a campaign whistle stop in Pekin on Oct. 2, 1952. Then in June 1973, President Richard Nixon came to Pekin to dedicate the Dirksen Congressional Center here at the Pekin Public Library. Two years later, in August 1975, President Gerald Ford returned to dedicate the new library building. Pekin was next visited by Vice President George H. W. Bush in Sept. 1988 during his successful election campaign that year. During his U.S. senatorial campaign in 2004, Barack Obama made a campaign stop in Pekin, and later, during his 2005-2008 term in the U.S. Senate, President Obama visited the Aventine Renewal Energy plant in Pekin on March 14, 2005, also meeting constituents at the Pekin Public Library as senator. He later visited East Peoria as president (but not Pekin). Similarly, John F. Kennedy campaigned in East Peoria before his election, and George W. Bush visited East Peoria as president, but neither of them visited Pekin. (President Theodore Roosevelt also once went hunting in the Spring Lake area of Tazewell County.)

The Local History Room display, which will be exhibited through Lincoln’s Birthday next month, includes mementos of Lincoln, Hoover, Nixon, Ford, and Bush. 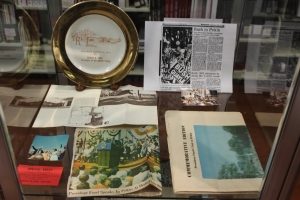