Last week we recalled President Herbert Hoover’s brief whistle stop in Pekin on Nov. 4, 1932. The library also recently exhibited mementos and articles having to do with the links that various U.S. presidents have had with Pekin.

To continue with this “presidential” theme, this week we will take a look at one of the volumes in the Pekin Public Library’s Local History Room collection. It’s a 792-page book entitled, “American Presidential Families,” compiled and edited by Hugh Brogan and Charles Mosley, and published in 1993 by Burke’s Peerage & Baronetage, a 191-year-old company that specializes in the genealogy of the nobility and royalty of Britain and Ireland. Burke’s interests also extend to the genealogy of notable or powerful families of some of Britain’s former colonies, which is why they prepared a volume on the ancestry and descendants of American presidents. 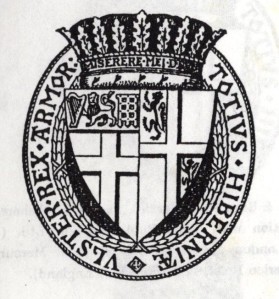 “American Presidential Families” includes biographies, family histories, and genealogical charts for every U.S. president from George Washington to Bill Clinton. For some presidents, the genealogies are extensive and detailed (Washington’s family history alone fills pages 45-99 of this book), while others came from families of whose ancestry not very much is known (as is the case with Andrew Jackson, Andrew Johnson, Ronald Reagan, and Clinton). Of President Jackson’s ancestry, for example, we know nothing more than the names of his parents, his paternal grandfather, his paternal great-grandfather, and only the surnames of his maternal grandparents. As for Andrew Johnson, almost nothing certain is known of his father’s ancestry, while on his mother’s side only his maternal grandfather and great-grandparents are known.

Given the United States of America’s origin from 13 of Britain’s North American colonies, it’s natural that the genealogies of all U.S. presidents trace back to England, Scotland, Wales, and Ireland. In most cases, it’s the president’s direct paternal line that goes back to Britain or Ireland, while his ancestry may indirectly go back to other European countries. However, we have also had a few presidents whose paternal line goes back to the Netherlands or Germany – and, of course, very recently we had a president whose father was born in Kenya but whose mother had a typical white American ancestry originating in Britain (though President Barack Obama’s genealogy of course is not found in the 1993 “American Presidential Families”).

Something else that should not be surprising to learn is that many of our presidents were related to each other. In fact, genealogists have found that a very large number of Americans of white European ancestry share at least one common ancestor who lived from eight to 11 generations ago. The kinship of several of the earliest presidents, however, was much closer than that. Thus, while George Washington’s popular title “Father of His Country” isn’t literal, Washington was in fact related by blood or by marriage rather closely to a number of the first presidents: James Madison, for instance, was the second husband of Martha Washington’s sister, while Zachary Taylor was George Washington’s third cousin once removed. Other presidential family ties were somewhat more indirect or convoluted – Lincoln’s second cousin Mary Sophia Lincoln was the first wife of William Ramsay Brown, whose second wife was Mary Johnson Stover, younger daughter of President Andrew Johnson, Lincoln’s vice president and successor.

Like many other Americans, quite a few presidents were descendants of European aristocracy and royalty. This is particularly true of George Washington, whose paternal lineage has been traced through the centuries father-to-son all the way back to Maldred, Lord of Allerdale, younger brother of Duncan I, King of Scotland – the same Duncan who was killed by Macbeth on Aug. 14, 1040. By virtue of their descent from noble families in Britain, many U.S. presidents are known to be distant cousins (sometimes very distant).

The lives and accomplishments of most of our presidents have been remarkable and memorable. The intertwining and entangled branches of the family trees of American presidents are not at all unique or remarkable, though. Rather, they are representative of the same kind of intermingling that has created numerous genealogical connections between most American families – the kind of extensive family ties and common ancestry that constitute the tangible substance of a nation, which may be thought of as groups of families grown very large.

Later this month, the nation will observe Monday, Feb. 15, the third Monday of the month, as President George Washington’s Birthday. The federal holiday today is commonly called Presidents Day since President Abraham Lincoln’s birthday is Feb. 12 while Washington was born Feb. 11 on the old Julian calendar (Feb. 22 on the reformed Gregorian calendar). Washington is famed and revered as the first president of the United States of America, and also for his crucial role as the heroic commanding general of the Continental Army during the American Revolutionary War.

Almost all combat and military activity during the War of the Revolution took place within the borders of the 13 English colonies on the Atlantic seaboard. Illinois in those days was under the control of the British Crown, having formerly been a French colonial territory chiefly inhabited by Native American tribes and small groups of French fur traders. Compared to the great and memorable battles in the 13 colonies, military activity in the territory that would later become the state of Illinois was negligible. American Revolutionary forces did, however, succeed in seizing control of the Illinois territory through Col. George Rogers Clarks’ Illinois Campaign in 1778-1779, securing the western frontier of the nascent American republic against British attacks from that direction.

Though there were few American soldiers then living in the future state of Illinois, a large number of Revolutionary War veterans subsequently settled in Illinois and are buried here. One of the volumes in the Pekin Public Library’s Local History Room collection is titled, “Soldiers of the American Revolution Buried in Illinois,” published by the Illinois State Genealogical Society as a part of the nation’s Bicentennial celebrations in 1976. This volume lists all Revolutionary War veterans known to be buried in the state. Among them are eight veterans buried in Tazewell County (none of them served directly under Gen. Washington, though).

To be clear, there are other heroes of the War of the Revolution who lived for a while in Tazewell County but moved on to other parts of the state, or to other states, and therefore aren’t buried in Tazewell County. However, these are the eight veterans buried in this county:

The adventures of the last named Private Shipman and his manumitted former slave Moses Shipman were the subject of two previous From the Local History Room columns, on Sept. 21, 2014, and Jan. 4, 2014.