Over the coming weeks, the Pekin Public Library and Pekin Community High School are presenting a programming series spotlighting a tragic facet of Illinois’ history beginning in the first half of the 20th century with repercussions continuing to the present day – the women remembered as the “Radium Girls,” who had suffered and died as a result of radium poisoning on the job in Ottawa, Ill.

The programming series opens at the library at 6:30 p.m. Thursday, Oct. 11, with “Marking Time: The Radium Girls of Ottawa,” in which Heinz Suppan will present his book “Marking Time” and tell of the plight of the young women who worked for the Radium Dial Co. in Ottawa, where the women used radium-laced paint to create watches and clocks that glowed in the dark. Through their work, the women were exposed to radioactive radium both externally and internally, as their employer, although aware of the dangers of radium, misled the women and even encouraged them to lick the ends of their paint brushes to form a fine point. 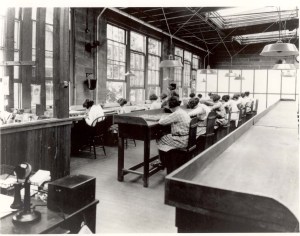 Women are shown at work in a radium dial factory. PUBLIC DOMAIN IMAGE FROM WIKIMEDIA COMMONS

As the next program in the series, the library’s Book2art book group will read Kate Moore’s book “Radium Girls.” The group will meet at 6:30 p.m. Thursday, Oct. 18, to discuss Moore’s book and do a craft related to the book.

The next day, at 11 a.m. Friday, Oct. 19, the library will show the “Radium City” film documentary upstairs in the Community Room. Later the same day, at 2 p.m. actors from the Pekin Community High School show “Radium Girls” will come to the library and perform scenes from their show.

All of the library’s programs are free and open to the public. Tickets for the high school’s three showings of “Radium Girls” are $5 for adults and $3 for students. Tickets are available at the PCHS Branch Finance Office or may be purchased at the door prior to performance.

Earlier this year, NPR Illinois published a report by Tara McClellan McAndrew entitled “The Radium Girls: An Illinois Tragedy,” in which McAndrew drew upon authorities such as Kate Moore’s book.

“Some of the Ottawa painters,” McAndrew observed, “despite their long, agonizing illnesses with crippling sarcomas, crumbling jawbones, crushed spines, amputated limbs and other maladies, were among the luckier ones. Because of Illinois’ progressive workers’ compensation laws, some of the Radium Dial workers received financial awards.”

The progress of the Ottawa Radium Girls’ lawsuit frequently made the front page of newspapers across the country in the latter 1930s – including the Pekin Daily Times, which referred to the radium-poisoning victims as the “doomed women of Ottawa.” 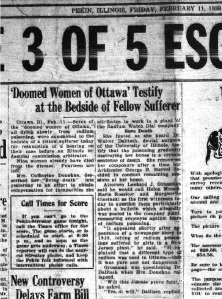 The plight of Ottawa’s Radium Girls made the front page of the Feb. 11, 1938 Pekin Daily Times, in a report of a workers compensation hearing that took place at the side of what would soon become the deathbed of radium poisoning victim Catherine Donahue.

According to McAndrew, dial painters who died from radium poisoning probably numbered in the thousands across the country, but only in Illinois did victims obtain legal compensation for the suffering caused by their employer’s negligence and lack of compassion. This was possible because in 1911 Illinois was one of the first states to adopt a workers compensation law, which led to the establishing of the Illinois Industrial Commission in 1917.

The first attempt of Ottawa’s Radium Girls to win compensation was denied, so the Illinois General Assembly passed the Illlinois Occupational Disease Act, which enabled the victims to obtain compensation.

McAndrew said, “Although dial painters in other states sought retribution for their fatal illness, those in Ottawa were the only ones ‘to win state sanctioned compensation for radium poisoning,’ wrote Claudia Clark in Radium Girls: Women and Industrial Health Reform, 1910-1935.”

The terrible suffering of the Radium Girls and their families was not in vain, as their plight contributed to the eventual establishment by President Richard Nixon in 1970 of the federal Occupational Safety and Health Administration (OSHA).

Since 2011 a statue commemorating the Radium Girls has stood at the northwest corner of Clinton and West Jefferson streets in Ottawa.