The founding of Pekin was due to the influx of settlers of central Illinois during the 1820s, in the decade following Illinois statehood. This area’s newcomers in that wave of settlement were first attracted to Fort Clark (Peoria), but before long pioneers were establishing homesteads up and down the Illinois River valley in Peoria’ vicinity.

Pekin, as it well known, began with Jonathan Tharp’s homestead of 1824 on a ridge above the Illinois River, at what is now the foot of Broadway near downtown Pekin. Within a year, Tharp had been joined by several other settlers, including his own father Jacob Tharp (1773-1871) and brother Northcott Tharp, and his friend Jesse Eggman, all of whom arrived in 1825 and built cabins near Jonathan’s.

Most of what we know of Pekin’s “pre-history” during the 1820s comes from three sources: the 1860 diary of Jacob Tharp, William H. Bates’ 1870 account of Pekin’s history that he first published in the 1870-71 Sellers & Bates Pekin City Directory, and Charles C. Chapman’s 1879 “History of Tazewell County.” 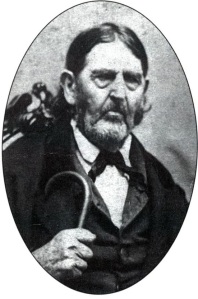 The 1860 diary of Pekin pioneer Jacob Tharp (1773-1871), shown here, is one of the most important primary sources for the history of Pekin’s founding.

Jacob Tharp’s diary contains the earliest surviving reference to Pekin as “the Celestial City,” referring to the old pioneer tradition that Pekin had been named after Peking (Beijing), China. A transcript of Tharp’s diary was itself published on pages 565-562 of Chapman’s history, and Tharp’s account was substantially reproduced in the 1949 Pekin Centenary and the 1974 Pekin Sesquicentennial volumes. Following are excerpts from Tharp’s diary, drawn from Chapman’s county history:

“. . . After a streak of bad luck, in 1825, [I] left Ohio, where I then resided, and traveled through Indiana with one ox-team, a span of horses, and a family of twelve persons, reaching the site of Pekin just before Christmas.

“Jonathan Tharp, my son, built the first house ever erected in the city of Pekin, in 1824, on the spot now occupied by Joshua Wagenseller’s residence. Jonathan’s farm embraced the land now covered by our heaviest business houses.

“At the time of my arrival, Jonathan was the only occupant. Their neighbors were Major Nathan Cromwell, living on the Hawley farm; Gideon Hawley, living on the Mackinaw side of Sand Prairie; Seth Wilson, living on John Young’s farm; John and Geo. Clines, between that place and Tremont; the Woodrows and John Summers, living in the Woodrow settlement; the Dillon family, after whom that township was named; the Hodgsons, friends and relatives of the Dillons; old Benj. Briggs, afterwards Sheriff; James Scott, who with Wilson, acted as constable in those days; and Wm. Eads, who was the first miller in this section of the State. He ran a ‘horse-mill,’ and ground only corn. On New Year’s day, 1827, I went to Fort Clark, now Peoria, where I found a few cabins occupied by John Hamlin, James Dixon, and others. Hamlin had a little store, and I bought groceries, coffee selling at 37 ½ cents per pound. On my way home I contracted for mast-fed pork at $2.50 per hundred. I soon built my cabin, placing it about half way between Joshua Wagenseller’s house and the present landing at the river.

“In the summer of 1827, the first consignment of goods was sent to Pekin, by one [Mordecai] Mobley, the land auctioneer. I received them, and so won the honor of being the first commission merchant. Most of the goods, however, went on to Mackinaw, which was the first shire-town. Pekin at this early day, was reported to be the best commercial point on the Illinois river. All goods came up from St. Louis, which was the great basis of supplies for the settlers.

“The Government surveys were made previous to 1828. This year we were cheered by a close neighbor, a Mr. Hinkle, who came to put up a trading house for Absalom Dillon. The goods came before the house was finished, and so my smoke-house was used for the first store. This season the Methodists established a mission, and their first service was held in Hawley’s house, on Sand Prairie. In the fall of 1828, Absalom and Joseph Dillon moved to Pekin, and ‘camped out’ for a while. Major Cromwell came in 1829, and bought out Dillon’s stock in trade, when those gentleman returned to the country. In the same year, Hawley and William Haines built cabins in our town. The inhabitants then consisted of Cromwell, Hawley, Haines, Dr. John Warner, the two Hiatts, Jonathan Tharp and myself. Mr. Clark made a raft of hewed puncheons, and started the ferry, placing a stake just below the present ferry landing to mark his claim.

“When the land sales were held at Springfield, there were several claimants for the Pekin town-site. On the first day of the sale the bidding ran high, and the land was knocked down to William Haines at $20.00 dollars an acre; but he did not comply with the regulations of the sale, and on the second day the same tract was sold for one hundred dollars per acre. The buyer again failed to comply, and the tract was once more offered on the third day. A man in Springfield, named Harrington, had in the meantime a deadly quarrel with Major [Isaac] Perkins, one of the principal claimants, growing out of some delicate question. Those were chivalrous days, and he determined on revenge. So he placed himself near the auctioneer, armed to the eyebrows, and when the coveted tract was put up, he bid one dollar and twenty-five cents an acre, and swore he would blow out any man’s brains who offered a higher bid. Major Perkins was stalking around the room, armed for battle and hunting blood. There was immense excitement, and death was felt in the atmosphere, but the tract was knocked down to Harrington. He complied with the regulations and walked out feeling sublime, but the Major and his friends captured the usurper, conveyed him to a room and persuaded him to make out deeds for the prize. From these papers the original title is derived.”

“In the spring of 1830, the proprietors surveyed and laid out the town, Perkins, Hawley, Haines and Cromwell being the active agents. Cromwell did the surveying. About this time Perkins sold out to Thomas Snell, from Cincinnati, Ohio. The gentlemen were much exercised about the way in which to lay off the celestial city. The elder Hiatt had a claim upon the Lake shore, but when the land sales occurred he forgot to bid, and Carpenter bought his tract, also buying eighty acres on the east side of said tract. The proprietors of the future city included these two tracts in the town-site. Mr. Hiatt was appeased with a pony purse of seventy-five or eighty dollars.

“After some property sales, the foreign owners were bought out and the entire city owned, body and soul, by five persons, namely: William Haines, Thomas Snell, Nathan Cromwell, William Brown, and David Bailey. The surveys were finally completed, and it was found that the lots had cost just twenty-eight cents apiece. The advertisement for the gale of lots was immediately made, to take place in April, 1830. The deed of partition was drawn up before the sale, and is the one now on record.”

Many additional details on Pekin’s founding were recorded in four pages of the original handwritten minutes of the stockholder meetings of the company that founded Pekin. From these minutes we learn that on Dec. 28, 1829, Cromwell was appointed to survey and stake out the proposed town, and Cromwell reported on Jan. 18, 1830, that “the survey of Said Town, is Compleeted (sic) and the Stakeing (sic) nearly done.”

On Jan. 19, 1830, according to the minutes, the company’s commissioners met again to decide on the name of the new town and to arrange the sale of lots to be announced in several newspapers throughout the Midwest. Isaac Perkins made the motion to vote on the town’s name, and three names were proposed: Pekin, Port Folio, and Portugal. According to old pioneer tradition, Nathan Cromwell’s wife Ann Eliza had proposed the name of “Pekin,” and that name garnered the most votes – and thus Pekin was born.