Following up on our comparison last month of two old aerial views of Pekin from circa 1950 and 1988, this week let’s stretch our view even further back in time – all the way back to the last couple decades of the 1800s.

Around that time, Richard Acton of Chicago prepared and published a collection of photographs of Pekin buildings and vistas, in a book entitled, “Pekin and Environs.” As we noted about a month ago, recently the library received a donation of Benjamin S. Prettyman’s own copy of “Pekin and Environs.”

Among the photos in this book are two aerial views of Pekin – or “semi-aerial,” because in those days it wasn’t that easy for photographers to get themselves airborne, so instead they would have to settle for perching atop tall buildings or towers or hills.

In this case, the photos – called “birdseye views” – were taken from the old water tower of the Pekin Water Works, which was located exactly where the “water works” of Illinois-American Water are still located today – at the southwest corner of Broadway and Capitol.

The downtown view encompasses an area from around Broadway out to Court St., and from the 300 block of Pekin’s downtown streets down to the river. Then as now, railroad tracks ran parallel with Third St., but there’s not much else that is the same or similar. You may notice that the streets were unpaved and much narrower than they are today. The tall white building in the middle of the photo is the old Illinois Hotel, which can be seen in the circa 1950 aerial view of Pekin, but was torn down in the 1960s. The block in the center of this photo, packed with homes that had sheds, pens and coops for livestock, is now occupied by the State of Illinois Driver’s Facility, while the block to the east of that is now occupied by Davison-Fulton-Woolsey Funeral Home.

The birdseye view to the southwest looks toward some of Pekin’s old alcohol distilleries, once the backbone of the city’s economy. As you can see, the way the factories belched out smoke and fumes over the city indicates that this was long before the Clean Air Act. Even in those days, prevailing winds carried the exhaust of factory smoke stacks out over the city – but placing the distilleries downstream at least meant Pekin’s residents wouldn’t have to drink the effluent which factories discharged into the river. 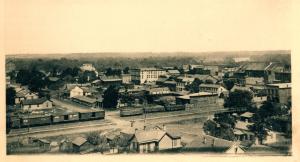 These two photographs above from the circa 1890 volume “Pekin and Environs” show two “birdseye” views of Pekin looking northwest and southwest from the old water tower that was located near the southwest corner of Capitol and Broadway.