Pekin Daily Times owner and publisher F. F. McNaughton used his daily “Editor’s Letter” newspaper column to chronicle the weeklong trip to Washington, D.C., that the Pekin Kiwanis Club and a party of Peoria teachers took in June 1932. The fourth of his daily log entries, a letter written from Washington, D.C., was printed on the front page of the June 16 issue. This log entry, which tells of how the Kiwanis tourists came to witness the shocking death of a Congressman on the floor of the House of Representatives, follows below:

What a thrill the youngsters particularly are having tonight.

Under a brilliant moon we are in the resplendent city of Washington, called “the fair flower of the republic.”

One must see this city to appreciate it, and he must see it again if he has not seen it recently.

As I write this we are looking a quarter mile across the Union Depot plaza to the capitol – there the lights just then were turned on to flood the dome.

In the streets beneath are thousands of autos, threading these diagonally platted streets.

We got separated from the gang for a half day this p. m. My youngest lad, Dean, is a poor auto rider. That mountain climb not only got him upset, but the other two boys also. Joe couldn’t eat his breakfast. John ate his but he had to leave the dinner after each course and throw it up.

So I decided not to risk them on the long ride across Maryland to [microfilm damaged] to the hotel, jumped into tubs to clean up and hotfooted it across the plaza to the house to listen to the debate on the bonus. You’ve probably read in tonight’s Times what happened. Rep. Eslick of Tennessee dropped dead while making a speech for the bonus.

The house immediately was adjourned. Mrs. Eslick was in the gallery. She saw her husband die.

So we went over to the senate and saw Vice-President Curtis and some of the best known senators in action, then they too adjourned out of respect for Rep. Eslick.

We then dropped in at Congressman Hull’s office and were received with every courtesy. I think I’ll be dropping back in there to write my letter to you tomorrow. It takes me too long to write by long hand.

There, the boys say I must be going.

After that we’re going to the Fox theater then call it a day – and what a day! 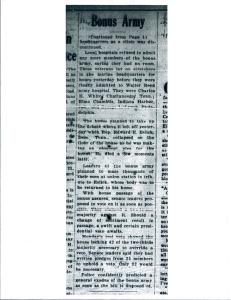 Pekin Kiwanis Club tourists witnessed the death of Congressman Edward E. Eslick of Tennessee, who was felled by a massive heart attack on June 15, 1932, on the floor of the House of Representatives while he was delivering an impassioned speech in favor of a bill that would allow World War I veterans who were suffering due to the Great Depression to cash in their service bonus certificates early. Eslick’s death was reported on page 4, column 2, of the June 15 Pekin Daily Times, and also was commented on by Times publisher F. F. McNaughton in a letter he wrote from Washington, D.C., that was published June 16.