Here’s a chance to read again one of our old Local History Room columns, first published in March 2012 before the launch of this blog . . .

William H. Bates of Pekin, ‘the historian of the city’ 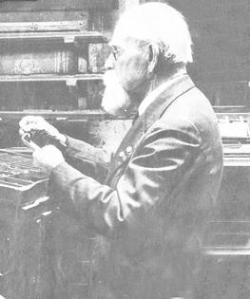 When this photo was taken in March 1930, William H. Bates, longtime printer and pioneer historian of Pekin, was approaching his 90th birthday. He was a printer for more than 77 years.

It’s simply impossible to study the early history of Pekin and Tazewell County without running across the name, and relying on the publications, of William H. Bates of Pekin. Regular readers of this column will recall that Bates was the first to publish a history of Pekin, which was included in the old Bates Pekin City Directories starting in 1870. But just who was William Bates, and how did he become Pekin’s pioneer historian?

The Pekin Public Library’s Local History Room files hold the answers to those questions, specifically in the lengthy obituary of William H. Bates published the day after his death in the Nov. 12, 1930, edition of the Pekin Daily Times.

“Few men had contributed as much of their time and means for the betterment of Pekin as Col. Bates,” the obituary says. “He gave the city its first daily newspaper, back in the early seventies, the Bulletin, but the venture did not pay and the paper was discontinued after nine months. He was one of the publishers of the Weekly Republicans, printed numerous city directories containing much historical data and issued the souvenir booklet at the dedication of the court house, Wednesday, June 21, 1916. He was the historian of the city and knew more of the story of its early history and growth to its present population than any living man.”

Bates was born in New London, Ohio, on April 28, 1840, the son of Truman and Elizabeth Bates. The Bates family settled in Lafayette, Ind., in 1848, and it was there that William went to school and learned the printer’s art. He got a job on Sept. 15, 1853, in the Lafayette Daily Argus print shop, and the next year he transferred to the Lafayette Daily Courier. There he would compose a column of type and feed one end of an old-fashioned wood-framed Adams press. In 1855 he joined the staff of the Daily Morning Journal at Lafayette.

Fate brought him to Pekin in 1858. Desiring to visit some of America’s larger cities, he “packed his carpet-bag and took the train for Chicago,” his obituary says. He was only in Chicago for three weeks, however, when he received a letter from a sister who was living in Pekin, urging him to come and visit her. His visit was extended, and apart from his three years of Civil War service in the Union army, he remained in Pekin until the end of his life.

Bates volunteered for the U.S. Army from 1861 to 1864, serving in Companies C and H, 8th Missouri Infantry, 15th Army Corps. He “took part in twenty-six engagements, his regiment having the distinction of never losing a battle. He and other printers in his regiment issued a paper from a print shop they took over at Mexico, Mo., printing the edition on manila wrapping paper, the only kind available, the owner having secreted the print paper at the approach of the troops.”

Prior to war, Bates happened to meet Abraham Lincoln in Metamora. “During the time he worked at his trade in Peoria he was sent to Metamora to overhaul a print shop there that was badly run down. During his short stay the young printer stopped at the local hotel or tavern, and Abraham Lincoln, who was later to become president and a world figure, was there attending court. For a week the gaunt railsplitter entertained the crowd around the office stove with his stories, and he had no more attentive listener than young Bates. The latter remembered some of the stories Lincoln told and delighted in retelling them. In Lincoln he saw one of the future great men of the republic, became one of his ardent admirers and was always a consistent republican.”

Bates played a central role in many of the affairs of his community. Active in local politics, he was Fourth Ward alderman in 1887-88, was elected city treasurer in 1903 for two years, and made an unsuccessful bid for the mayor’s office in 1914. He also supervised Pekin’s Memorial Day celebrations until 1929.

“He was at the fore in all public demonstrations and old-timers still talk about ‘Giasticutus,’ a mechanical elephant Mr. Bates constructed for the Fourth of July parade of 1876,” says his obituary.

“Patriotic to the last, he said only a few days ago: ‘I don’t care what there is on the casket so there is a flag.’ And a flag covers him as he reposts at this home on Haines avenue.” The obituary also commented how fitting it was that, “While the nation paused for Armistice day, marking the end of the world’s greatest war, an heroic figure in civil war history, William H. Bates, passed out of life into that realm of eternal peace. . . . “ Daily Times publisher F.F. McNaughton went to the trouble of making sure Bates received a grand military funeral, the first one in Pekin’s history.

Bates never retired from his trade. At the time of his death, Bates was said to be the third oldest printer in the U.S., and perhaps the oldest active printer in the country.