Here’s a slideshow of some interior and exterior views of the library’s Local History Room. We’re really proud of the room’s appearance and hope you’ll agree.

The historic lamp from Pekin’s original Carnegie Library (1902-1972) seems to make for an especially symbolic addition to the Local History Room. We like to think of our room as helping to keep the lamp of Pekin’s history and tradition burning while shedding light on our community’s past.

We’ve been adding links to our Blogroll on the right of the screen. “From the History Room” now features several handy hyperlinks to local genealogical and historical societies and museums, as well as a few digital versions of old, standard reference works on Pekin and Tazewell County history.

This week we revisit the first military engagement of the Black Hawk War of 1832, the Battle of Sycamore, more commonly remembered as Stillman’s Run or Stillman’s Defeat, which took place at a location about midway between Dixon and Rockford in Ogle County.  It was in Stillman’s Run on May 14, 1832, that Pekin co-founder Major Isaac Perkins lost his life.

The early publications on Pekin and Tazewell history usually refer to Isaac as “Major Isaac Perkins.” Genealogical researchers of the Perkins family suggest that he probably acquired that rank from an otherwise unknown tour of duty with the Illinois State Militia. Isaac’s only recorded military service, however, was as a Private in the Black Hawk War, when he served in the 5th Illinois Regiment Brigade of Mounted Volunteers under the command of Major Isaiah Stillman, from Fulton County, and Major David Bailey of Pekin. 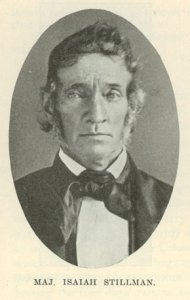 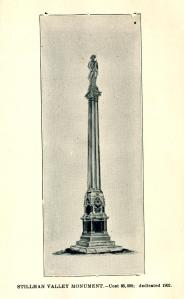 Charles C. Chapman included an account of the battle on pages 258-261 of his 1879 “History of Tazewell County.” Chapman relates that Stillman and Bailey and their men unwittingly made camp near Black Hawk’s warriors. Stillman’s ill-trained and undisciplined men were immediately thrown into a panic and complete disarray, and the battle, such as it was, quickly became a chaotic retreat (hence the mocking name, “Stillman’s Run”). Black Hawk’s warriors easily slaughtered, scalped and beheaded the few soldiers – about eight or nine men – who attempted to make a stand, including Perkins.

Coming upon the gory scene the next day was a state militia brigade led by a 23-year-old captain named Abraham Lincoln, who with his men gathered the remains of the fallen and buried in a common grave at the battle site, near a creek that consequently was named Stillman’s Creek. In 1901, a monument was erected at the site, which today is at the east end of the town of Stillman Valley.

In addition to Chapman’s account of Stillman’s Run, the Pekin Public Library’s Local History Room collection includes a few other publications pertaining to Illinois history that provide information on this battle. The most detailed and useful of these publications is “Transactions of the Illinois State Historical Society for the Year 1902,” which includes papers and talks presented during the society’s third annual meeting in Jacksonville.

Also included, on pages 170-179, is the text of an extended historical address that Illinois historian Frank E. Stevens, author of a work entitled “The Black Hawk War,” presented at the June 11, 1902 dedication ceremonies of the Stillman Valley Monument commemorating the men killed there in 1832. Stevens’ address incorporated or quoted from various eyewitness and contemporary accounts of the battle, including Major Stillman’s own version of what had happened, as published in the July 10, 1832 edition of the Missouri Republican. According to Stevens, though, the debacle of Stillman’s Run was simply a case of panic sweeping through a troop of untrained and undisciplined men.

“After five miles’ pursuit,” Stevens said, “the Indians abandoned it to return to mutilate the bodies of the dead, as described by Mr. [Oliver W.] Hall; but the whites continued their flight, running, riding, yelling, crying – hopelessly crazed, until Dixon’s Ferry was reached in the early hours of the morning of the 15th. Others becoming confused deflected to the south, and never stopped until the Illinois river was reached at a point near the present city of Ottawa. From there about 40 of them scattered for their homes.

“It was a clear case of panic. Men were crazed. They who in a sober moment would have walked straight to death without a protest; they who would bend to no command of a superior officer; they who would not obey or follow, were driven as easily as a flock of panic stricken sheep. It has been said and written that whiskey was the cause of that unfortunate rout; but that assertion is hopelessly improbable in the face of the fact that but two casks were taken with the baggage train to be consumed by 275 men, who lived in a whiskey drinking age, when five or ten drinks, more or less, made little difference in a daily average. Mr. John E. Bristol, of Eads’ company, who at 91 is alive and hearty today, vouches for the truth of this assertion, and the other one, that but two small casks were taken along. Mr. Hall specifically states that one cask was emptied by the Indians, and Black Hawk makes the same statement. Therefore it is certain that whiskey cut no figure in the panic.”

See also “The life and death of Major Isaac Perkins“

Here’s a chance to read again one of our old Local History Room columns, first published in April 2012 before the launch of this blog . . .

Pekin has its own ‘Liberty Bell’

The original Liberty Bell last rang out on Washington’s Birthday, Feb. 1846. The ringing that day caused the bell’s famous crack to worsen, permanently silencing it. By that time, however, the Abolitionists had adopted the Liberty Bell as the symbol of their movement to outlaw slavery. As recently discussed in this column, many abolitionists lived in Pekin in those days, so it’s no surprise that the Celestial City eventually was one of many American communities to acquire a replica of the Liberty Bell.

Pekin’s original high school operated out of the “Fourth Ward” schoolhouse, which was located at the present site of Washington Junior High School. Opening in 1869, it was destroyed in a fire on Dec. 2, 1890. “The story goes that during the holocaust many spectators gathered bits of metal from the melting bell and wore these as watch fobs for years thereafter,” says the 1974 Pekin Sesquicentennial.

The old high school “was replaced for $28,000 by a more imposing structure on the same site which became known as Washington School. High school classes were taught there until the new high school, what is now known as West Campus/Old Main, was first occupied in 1916,” according to “Pekin: A Pictorial History” (1998, 2004).

Since the Fourth Ward school’s bell was lost in the 1890 fire, a new bell for the new school was commissioned: Pekin’s replica of the Liberty Bell.

Finally, in 2002 the new Pekin Municipal Building was constructed at the corner of Capitol and Sabella streets. The bell now hangs atop a brick bell tower attached to the structure exterior, positioned right behind the mayor’s seat in council chambers.

Pictured below is an image of the bell in the plaza in front of the old city hall at the corner of Fourth and Margaret streets. 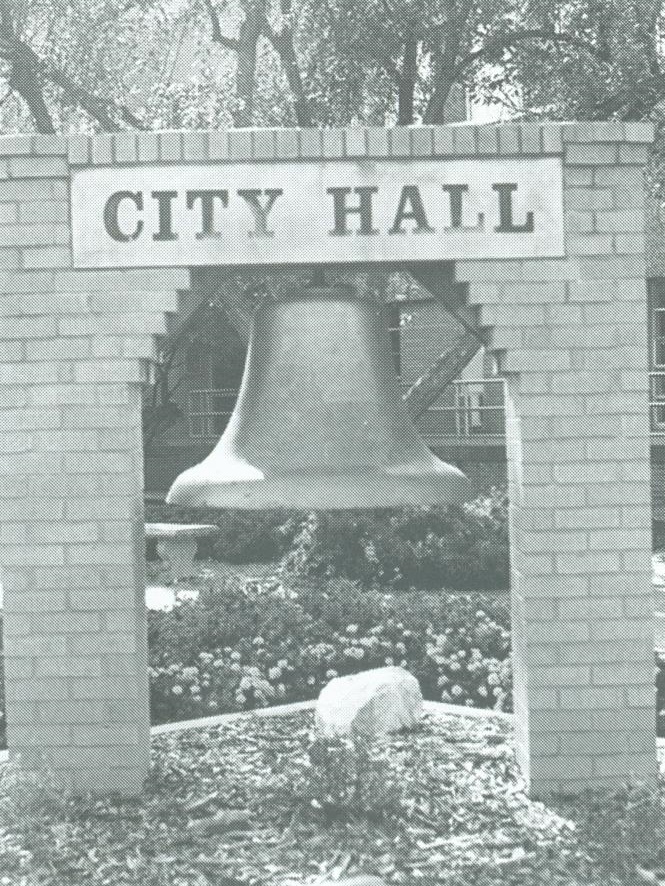 Hello and welcome to our visitors! In the summer of 2015 the Pekin Public Library debuted this new weblog spotlighting our Local History Room collection. The weekly “From the Local History Room” column that is published in the Saturday Pekin Daily Times will be posted here. We welcome your comments and questions and research queries.

Ben C. Allensworth’s 1905 “History of Tazewell County” devotes an entire chapter (Chapter VII) to the Tazewell County Old Settlers’ Association, a group that formally organized in Delavan in 1884. Even before then, however, it was already common to think and to speak of the earliest pioneers of the county as the “Old Settlers.” Thus, we see that the biographies in the 1873 “Atlas Map of Tazewell County” frequently bestow the designation of “Old Settler” upon various individuals.

By 1884, according to Allensworth, many of the Old Settlers felt a desire to form a permanent association “to promote acquaintance and friendship among those who had lived in the county forty years, thereby cementing the ties which have bound the pioneers of the county together during that period, and to keep an accurate record of the birth-place and age at which each came to the county, as well as the date of the death of those who have passed away.”

The Old Settlers’ Association began with about a dozen members, who elected Ira B. Hall as their first president and Cyrus M. Kingman as secretary. The group would have an annual meeting or reunion at the Tazewell County Fair in Delavan. An account of one of their meetings is found in an old newspaper clipping from the collection of Darlene Hamann of Green Valley. The clipping, dated Wednesday, Aug. 29, 1900, was reprinted in the Tazewell County Genealogical & Historical Society Monthly, June 2014, page 1030. Under the triple headline “Tazewell’s Old Settlers,” “They Assembled 400 Strong at Delavan Yesterday – 21 Died During Year,” and “Officers Re-Elected – Fair News,” we read the following:

“The feature of the opening day of the Tazewell county fair at Delavan yesterday was the gathering of the old settlers from all parts of the county. In round numbers there were 400 of the county’s ‘early birds’ on the grounds, renewing acquaintances and exchanging reminiscences. The organization has over 700 members and during the year 21 have been called to their reward. The morning was consumed by routine business and a number of very interesting short talks were made. President James Haines of Pekin, Ira B. Hall of Delavan, Judge N. W. Green of Pekin, and M. D. Pettett of Lincoln all spoke briefly. Mr. Pettett was 90 years old last May and is as spry as the average man of 60. Mr. Hall is 88 years old and has lived in the county over 60 years. The oldest woman present was Mrs. Margaret Young of Pekin aged 82. She came to this county in 1820. The business meeting was concluded by the election of officers for the ensuing year as follows:
“President – James Haines Sr. of Pekin; fourth term
“Vice-President – C. M. Kingman of Delavan; second term
“Secretary and Treasurer – W. F. Copes of Pekin; sixth term
“In the afternoon Judge William Don Maus of Pekin of Pekin delivered the address of the day. It was an eloquent and lengthy discussion upon the scenes and incidents of the times of the pioneers. The address was eagerly listened to by a great crowd of people and all expressed themselves as enjoying it very much.”

During the 19 years that Copes was secretary and treasurer, the Old Settlers’ Association had 768 members, 182 of whom had died by 1905, in which year there were 587 members of the rolls. 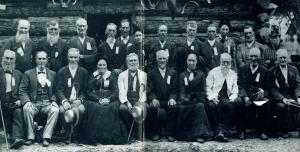